Our code now has the perfect structure in place to let us dabble with animations freely, so it's time to learn about CGAffineTransform. This is a structure that represents a specific kind of transform that we can apply to any UIView object or subclass.

All of these functions return a CGAffineTransform value that you can put into a view's transform property to apply it. As we'll be doing this inside an animation block, the transform will automatically be animated. This illustrates one of the many powerful things of Core Animation: you tell it what you want to happen, and it calculates all the intermediary states automatically.

Let's start with something simple: when we're at currentAnimation value 0, we want to make the view 2x its default size. Change the switch/case code to this:

That uses an initializer for CGAffineTransform that takes an X and Y scale value as its two parameters. A value of 1 means "the default size," so 2, 2 will make the view twice its normal width and height. By default, UIKit animations have an "ease in, ease out" curve, which means the movement starts slow, accelerates, then slows down again before reaching the end.

Run the app now and tap the button to watch the penguin animate from 1x to 2x its size over one second, all by setting the transform inside an animation. You can keep tapping the button as many times more as you want, but nothing else will happen at this time. If you apply a 2x scale transform to a view that already has a 2x scale transform, nothing happens. 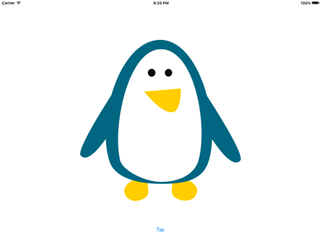 The next case is going to be 1, and we're going to use a special existing transform called CGAffineTransform.identity, or just .identity. This effectively clears our view of any pre-defined transform, resetting any changes that have been applied by modifying its transform property.

Add this to the switch/case statement after the existing case:

For the sake of clarity, your code should now read:

With the second case in there, tapping the button repeatedly will first scale the penguin up, then scale it back down (resetting to defaults), then do nothing for lots of taps, then repeat the scale up/scale down. This is because our currentAnimation value is told to wrap (return to 0) when it's greater than 7, so the default case executes quite a few times.

Let's continue adding more cases: one to move the image view, then another to reset it back to the identity transform:

That uses another new initializer for CGAffineTransform that takes X and Y values for its parameters. These values are deltas, or differences from the current value, meaning that the above code subtracts 256 from both the current X and Y position.

Tapping the button now will scale up then down, then move and return back to the center, all smoothly animated by Core Animation.

We can also use CGAffineTransform to rotate views, using its rotationAngle initializer. This accepts one parameter, which is the amount in radians you want to rotate. There are three catches to using this function:

With all that in mind, here's are two more cases that show off rotation:

As well as animating transforms, Core Animation can animate many of the properties of your views. For example, it can animate the background color of the image view, or the level of transparency. You can even change multiple things at once if you want something more complicated to happen.

As an example, to make our view almost fade out then fade back in again while also changing its background color, we're going to modify its transparency by setting its alpha value, where 0 is invisible and 1 is fully visible, and also set its backgroundColor property – first to green, then to clear.

That completes all possible cases, 0 to 7. But Core Animation isn't finished just yet. In fact, we've only scratched its surface in these tests, and there's much more it can do.

To give you the briefest glimpse of its power, replace this line of code:

This changes the animate(withDuration:) so that it uses spring animations rather than the default, ease-in-ease-out animation. I'm not even going to tell you what this does because I'm sure you're going to be impressed – press Cmd+R to run the app and tap the button for yourself. We're done!