There's one more trick XCTest has up its sleeve, and if you're not already impressed then I think this will finally win you over.

We've written tests for our data model: are the words loaded correctly? Are the word counts correct? Did the words get counted in an appropriate time? Does our user filtering work? These are all useful tests, and help make sure our code works now and in the future when further changes are made.

But none of those tests tell us whether our user interface is working as expected, so it's possible that the app could still be broken even though our model is in perfect condition.

XCTest has a solution, and it's a beautiful one: integrated user interface tests that manipulate your app as if there were a real user in control. XCTest is smart enough to understand how the system works, so it will automatically wait for things like animations to complete before trying to check your assertions.

You'll see Xcode has written setup() and tearDown() methods again, although this time the setup() method actually has some code in to get things started. You'll also see a testExample() method, but please just delete that – we'll be writing our own.

We're going to start with a very simple test: when the view controller loads, does it show the correct number of words? If you remember, our app applies an immediate filter for the word "swift", which appears 7 times in Shakespeare's comedies. So, to test that our initial app state is correct, we need to write this test:

Please go ahead and run that test now to make sure it works correctly.

OK, so how does that code work? There are only two lines, but it masks a whole lot of complexity:

Click inside that method, so that if you were to type you would be typing inside the method. Now click the red circle button just below your editing window: this will build and launch your app, but place it in record mode. It's a small button, but you can see it in the screenshot below.

When your app is recording a UI test, any taps, swipes, or other actions you perform in the app will automatically be converted to code inside your test – Xcode will literally write your test for you. However, there are three catches: first, it will usually write some fairly unpleasant code, and certainly rarely writes what a trained developer would do; second, it still doesn't know what a pass or fail looks like, so you need to add your own assertions at the end; third, sometimes it won't even write valid code, although recent Xcode versions have reduced the chance of that happening.

So, it's a long way from perfect, but it does at least give you something to start with that you can easily rewrite. Your app is already in record mode, because you clicked the red circle to start it off. I want you to switch to the simulator, click the search button, then use the on-screen keyboard to type "test". Finally, click the Filter button to dismiss the alert view, then go back to Xcode and click the red circle button again to end recording.

Note: Xcode sometimes fails to work with the iOS Simulator's hardware keyboard option – you may need to use the on-screen keyboard. 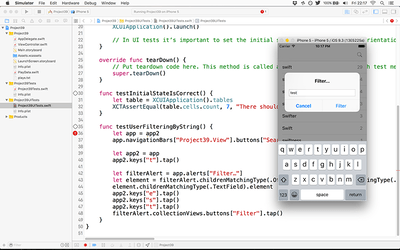 If everything worked correctly, Xcode will have written some code for you. Here's what I got:

Even though this is a very simple test, Xcode’s record feature managed to write some complex code. It doesn’t need to be complex, but at least Xcode's attempt does give us something to build on:

With all that in mind, here's a vastly improved version of the test:

Now, you might wonder why it's worth using Xcode's UI recording system only to rewrite literally everything it produced. And I'll be honest: once you understand how Xcode UI testing works you'll probably write all your tests by hand, and you'll even add things like comments and shared code to make them a valuable part of your project.

However, Xcode's UI recordings are useful when you're learning because it becomes significantly easier to get started when Xcode gives you something basic to work with.

Go ahead and run the test now, and you should see Xcode behaving like a real user. All being well, the assertion will prove true, and you'll get a green checkmark for your hard work – well done!