You've already seen how Core Data takes a huge amount of work away from you, which is great because it means you can focus on writing the interesting parts of your app rather than data management. But, while our current project certainly works, it's not going to scale well. To find out why open the Commit+CoreDataClass.swift file and modify its class to this:

When you run the program now you'll see "Init called!" in the Xcode log at least a hundred times - once for every Commit object that gets pulled out in our loadSavedData() method. So what if there are 1000 objects? Or 10,000? Clearly it's inefficient to create a new object for everything in our object graph just to load the app, particularly when our table view can only show a handful at a time.

Core Data has a brilliant solution to this problem, and it's called NSFetchedResultsController. It takes over our existing NSFetchRequest to load data, replaces our commits array with its own storage, and even works to ensure the user interface stays in sync with changes to the data by controlling the way objects are inserted and deleted.

No tutorial on Core Data would be complete without teaching NSFetchedResultsController, so that's the last thing we'll be doing in this project. I left it until the end because, although it's very clever and certainly very efficient, NSFetchedResultsController is entirely optional: if you're happy with the project as it is, you're welcome to skip over this last chapter.

First, add a new property to ViewController that will hold the fetched results controller for commits:

We now need to rewrite our loadSavedData() method so that the existing NSFetchRequest is wrapped inside a NSFetchedResultsController. We want to create that fetched results controller only once, but retain the ability to change the predicate when the method is called again.

Because we're setting delegate, you'll also need to make ViewController conform to the NSFetchedResultsControllerDelegate protocol, like this:

That was the easy part. However, when you use NSFetchedResultsController, you need to use it everywhere: that means it tells you how many sections and rows you have, it keeps track of all the objects, and it is the single source of truth when it comes to inserting or deleting objects.

Second, replace the numberOfSections(in:) and numberOfRowsInSection methods with these two new implementations:

As you can see, we can read the sections array, each of which contains an array of NSFetchedResultsSectionInfo objects describing the items in that section. For now, we're just going to use that for the number of objects in the section.

Third, find this line inside the cellForRowAt method:

And replace it with this instead:

As you can see, fetched results controllers use index paths (i.e., sections as well as rows) rather than just a flat array; more on that soon!

You’ll get another error inside the didSelectRowAt method, because that was reading from the commits array. Replace the offending line with this:

The final two errors are in the commit method, where deleting items happens. And this is where things get more complicated: we can't just delete items from the fetched results controller, and neither can we use deleteRows(at:) on the table view. Instead, Core Data is much more clever: we just delete the object from the managed object context directly.

So, to delete objects using fetched results controllers you need to rewrite the commit method to this:

As you can see, that code pulls the object to delete out from the fetched results controller, deletes it, then saves the changes – we no longer touch the table view here.

That being said, we do need to add one new method that gets called by the fetched results controller when an object changes. We'll get told the index path of the object that got changed, and all we need to do is pass that on to the deleteRows(at:) method of our table view:

Now, you might wonder why this approach is an improvement – haven't we just basically written the same code only in a different place? Well, no. That new delegate method we just wrote could be called from anywhere: if we delete an object in any other way, for example in the detail view, that method will now automatically get called and the table will update. In short, it means our data is driving our user interface, rather than our user interface trying to control our data.

Previously, I said "Using attribute constraints can cause problems with NSFetchedResultsController, but in this tutorial we're always doing a full save and load of our objects because it's an easy way to avoid problems later." It's time for me to explain the problem: attribute constraints are only enforced as unique when a save happens, which means if you're inserting data then an NSFetchedResultsController may contain duplicates until a save takes place. This won't happen for us because I've made the project perform a save before a load to make things easier, but it's something you need to watch out for in your own code.

Before we're done with NSFetchedResultsController, I want to show you one more piece of its magic. You've seen how it has sections as well as rows, right? Well, try changing its constructor in loadSavedData() to be this:

The only change there is that I've provided a value for sectionNameKeyPath rather than nil. Now try adding this new method to ViewController:

If you run the app now, you'll see the table view has sections as well as rows, although the commits inside each section won’t match the author name you can see. The reason for this discrepancy is that we’re still sorting by date – go to loadSavedData() and change its sort descriptor to this:

So, NSFetchedResultsController is not only faster, but it even adds powerful functionality with a tiny amount of code – what's not to like? 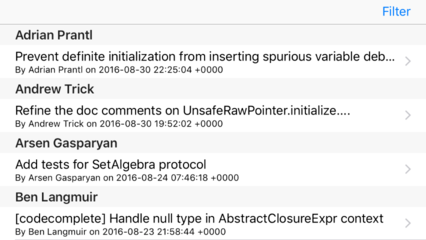