We're going to start by looking at the biggest method in the project, and perhaps even the entire Hacking with Swift series. It's called loadLevel() and is responsible for loading a level file from disk and creating SpriteKit nodes onscreen.

The method isn't long because it's complicated, it's long just because it does a lot. When you finish this project one of the suggested ways to improve the code is to split this method off into smaller chunks, so you should pay close attention to how it works!

At the core of the method it loads a level file from disk, then splits it up by line. Each line will become one row of level data on the screen, so the method will loop over every character in the row and see what letter it is. Our game will recognize five possible options: a space will mean empty space, "x" means a wall, "v" means a vortex (deadly to players), "s" means a star (awards points), and "f" means level finish.

Using this kind of very simple level text format means that you can write your levels in a text editor, and visually see exactly how they will look in your game. You've already tackled most of the code required for the skeleton of loadLevel(), but there are a few things I want to highlight:

Here's the initial code for loadLevel():

There are lots of comments in there where we're going to do work to load the various level components. Much of the code for these is the same: load in an image, position it, give it a physics body, then add it to the scene. But they do vary, because we want the player to be able to collide with some, we want to notified of collisions with some, and so on.

But first: we're going to be using the categoryBitMask, contactTestBitMask and collisionBitMask properties in their fullest for this project, because we have very precise rules that make the game work. To clarify, here's what each of them mean:

They all do very different things, although the distinction might seem fine before you fully understand. Category is simple enough: every node you want to reference in your collision bitmasks or your contact test bitmasks must have a category attached. If you give a node a collision bitmask but not a contact test bitmask, it means they will bounce off each other but you won't be notified. If you do the opposite (contact test but not collision) it means they won't bounce off each other but you will be told when they overlap.

A bitmask is a complicated beast to explain, but what it means in practice is that you can combine values together. In our game, vortexes, stars and the finish flag all have the player set for their contact test bitmask, and the player has star and vortex and finish flag.

SpriteKit expects these three bitmasks to be described using a UInt32. It's a particular way of storing numbers, but rather than using numbers we're going to use enums with a raw value. This means we can refer to the various options using names. Put this enum definition above your class in GameScene.swift:

Note that your bitmasks should start at 1 then double each time. With that, let's start replacing the comments in the loadLevel() method with real code. First, here's how to create a wall – replace the // load wall comment with this:

It uses rectangle physics, it's not dynamic because the walls should be fixed… this is all child's play to you now, right? When assigning a value to categoryBitMask we can’t use our enum directly because it expects to receive a UInt32. So, we’re getting the number from the enum using its rawValue property.

This is a little more interesting, because it uses rotate(byAngle:) and repeatForever() to make each vortex rotate around and around for as long the game lasts. It also sets the contactTestBitMask property to the value of the player's category, which means we want to be notified when these two touch.

And the code to load the finish flag:

That completes the method. It's long, but it's quite repetitive – there are several ways it could be refactored into something neater, but that would be cheating for later!

To see the fruits of your labor, add a call to loadLevel() in didMove(to:) then run your game. Remember to use the lowest-spec iPad simulator you can find in order to help it run quickly! 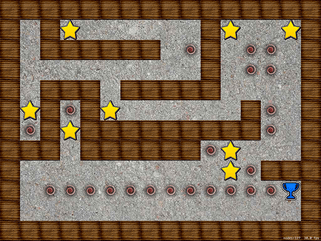 To finish off the level-loading code, we should add a background picture. You've done this many times so far, so please just go ahead and put this code into didMove(to:), before the loadLevel() call: