You've come so far already, and really there isn't a lot to show for your work other than being able to draw glowing slice shapes when you move touches around the screen. But that's all about to change, because we're now about to create the interesting code – we're going to make the game actually create some enemies.

There's a lot to cover here, so let's get started: add this new enum before the ForceBomb enum you added a few minutes ago:

That outlines the possible types of ways we can create enemy: one enemy that definitely is not a bomb, one that might or might not be a bomb, two where one is a bomb and one isn't, then two/three/four random enemies, a chain of enemies, then a fast chain of enemies.

The first two will be used exclusively when the player first starts the game, to give them a gentle warm up. After that, they'll be given random sequence types from twoWithOneBomb to fastChain.

You might have noticed I slipped in a new protocol there: CaseIterable. This is one of Swift’s most useful protocols, and it will automatically add an allCases property to the SequenceType enum that lists all its cases as an array. This is really useful in our project because we can then use randomElement() to pick random sequence types to run our game.

We're going to need quite a few new properties in order to make the plan work, so please add these now:

And here's what they do:

Whenever we call our new method, which is tossEnemies(), we're going to decrease both popupTime and chainDelay so that the game gets harder as they play. Sneakily, we're always going to increase the speed of our physics world, so that objects move rise and fall faster too.

Nearly all the tossEnemies() method is a large switch/case statement that looks at the sequencePosition property to figure out what sequence type it should use. It then calls createEnemy() correctly for the sequence type, passing in whether to force bomb creation or not.

The one thing that will need to be explained is the way enemy chains are created. Unlike regular sequence types, a chain is made up of several enemies with a space between them, and the game doesn't wait for an enemy to be sliced before showing the next thing in the chain.

The best thing for you to do is to put this source code into your project, and we can talk about the chain complexities in a moment:

That looks like a massive method, I know, but in reality it's just the same thing being called in different ways. The interesting parts are the .chain and .fastChain cases, and also I want to explain in more detail the nextSequenceQueued property.

To handle these chains, we have calls to asyncAfter() with a timer value. If we assume for a moment that chainDelay is 10 seconds, then:

So, it spreads out the createEnemy() calls quite neatly.

The nextSequenceQueued property is more complicated. If it's false, it means we don't have a call to tossEnemies() in the pipeline waiting to execute. It gets set to true only in the gap between the previous sequence item finishing and tossEnemies() being called. Think of it as meaning, "I know there aren't any enemies right now, but more will come shortly."

We can make our game come to life with enemies with two more pieces of code. First, add this just before the end of didMove(to:):

That code fills the sequence array with seven pre-written sequences to help players warm up to how the game works, then adds 1001 (the ... operator means “up to and including”) random sequence types to fill up the game. Finally, it triggers the initial enemy toss after two seconds.

The way we generate random sequence type values is using the CaseIterable protocol I mentioned earlier. If you cast your mind back, this is how we defined the SequenceType enum:

Note that it says enum SequenceType: CaseIterable, and it means we’ll automatically get an allCases property generated for our enum that contains each case in the enum in the order it was defined. So, to generate lots of random sequence types we can use SequenceType.allCases.randomElement() again and again.

The second change we're going to make is to remove enemies from the game when they fall off the screen. This is required, because our game mechanic means that new enemies aren't created until the previous ones have been removed. The exception to this rule are enemy chains, where multiple enemies are created in a batch, but even then the game won't continue until all enemies from the chain have been removed.

We're going to modify the update() method so that:

Put this code first in the update() method:

And now the part you've been waiting for extremely patiently: press Cmd+R to run the game, because it should now be getting close to useful! 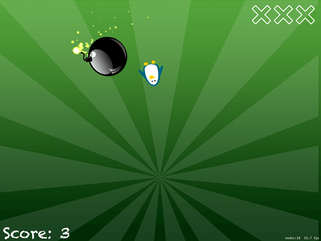