Like I already explained, we're going to keep an array of the user's swipe points so that we can draw a shape resembling their slicing. To make this work, we're going to need four new methods, two of which you've met already. They are: touchesBegan(), touchesMoved(), touchesEnded() and redrawActiveSlice(). You already know how touchesBegan() and touchesMoved() works, and the other "touches" methods all work the same way.

First things first: add this new property to your class so that we can store swipe points:

We're going to tackle the two easiest methods first: touchesMoved() and touchesEnded(). All the touchesMoved() method needs to do is figure out where in the scene the user touched, add that location to the slice points array, then redraw the slice shape, so that's easy enough:

When the user finishes touching the screen, touchesEnded() will be called. I'm going to make this method fade out the slice shapes over a quarter of a second. We could remove them immediately but that looks ugly, and leaving them sitting there for no reason would rather destroy the effect. So, fading it is – add this touchesEnded() method:

You haven't used the fadeOut(withDuration:) action before, but I think it's pretty obvious what it does!

So far this is all easy stuff, but we're going to look at an interesting method now: touchesBegan(). One we’ve read out the touch from the UITouch set, this needs to do several things:

We can convert that to code with ease – in fact, I've put numbered comments in the code below so you can match them up to the points above:

So, there's some challenge there but not a whole lot. Where it gets interesting is the redrawActiveSlice() method, because this is going to use a UIBezierPath that will be used to connect our swipe points together into a single line.

As with the previous method, let's take a look at what redrawActiveSlice() needs to do:

To make this work, you're going to need to know that an SKShapeNode object has a property called path which describes the shape we want to draw. When it's nil, there's nothing to draw; when it's set to a valid path, that gets drawn with the SKShapeNode's settings. SKShapeNode expects you to use a data type called CGPath, but we can easily create that from a UIBezierPath.

Drawing a complex path using UIBezierPath is a cinch: we'll use its move(to:) method to position the start of our lines, then loop through our activeSlicePoints array and call the path's addLine(to:) method for each point.

To stop the array storing more than 12 slice points, we’re going new method called removeFirst(), which lets us remove a certain number of items from the start of an array. In this case we know we want at most 12, so we can subtract 12 from our current count to see how many excess we have, and pass that to removeFirst().

I'm going to insert numbered comments into the code again to help you match up the goals with the code more easily:

At this point, we have something you can run: press Cmd+R to run the game, then tap and swipe around on the screen to see the slice effect – I think you'll agree that SKShapeNode is pretty powerful! 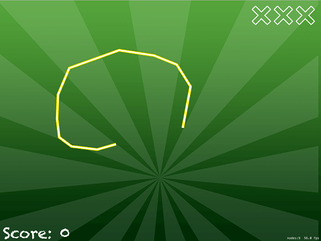 Before we're done with the slice effect, we're going to add one more thing: a "swoosh" sound that plays as you swipe around. You've already seen the playSoundFileNamed() method of SKAction, but we're going to use it a little differently here.

You see, if we just played a swoosh every time the player moved, there would be 100 sounds playing at any given time – one for every small movement they made. Instead, we want only one swoosh to play at once, so we're going to set to true a property called isSwooshSoundActive, make the waitForCompletion of our SKAction true, then use a completion closure for runAction() so that isSwooshSoundActive is set to false.

So, when the player first swipes we set isSwooshSoundActive to be true, and only when the swoosh sound has finished playing do we set it back to false again. This will allow us to ensure only one swoosh sound is playing at a time.

First, give your class this new property:

Now we need to check whether that's false when touchesMoved() is called, and, if it is false, call a new method called playSwooshSound(). Add this to code just before the end of touchesMoved():

By playing our sound with waitForCompletion set to true, SpriteKit automatically ensures the completion closure given to runAction() isn't called until the sound has finished, so this solution is perfect.

If you try running the game now you should hear only one swipe sound at a time.