The only way we can get through this project with our sanity intact is by whizzing through the things you know already so I can spend more time focusing on the new bits. So, be prepared for abrupt changes of pace: fast, slow, fast, slow, as appropriate.

The last three are all methods we'll create in a moment, but first there are two new lines in there. The default gravity of our physics world is -0.98, which is roughly equivalent to Earth's gravity. I'm using a slightly lower value so that items stay up in the air a bit longer.

I'm also telling the physics world to adjust its speed downwards, which causes all movement to happen at a slightly slower rate.

The first two new methods are easy and require little explanation, but you will need to add some properties to the GameScene class to support them:

That's all old news for you – if nothing else, this should show how far you've come! Now here are the two new methods:

You'll notice I'm adding the lives images to the livesImages array, which is done so that we can cross off lives when the player loses. 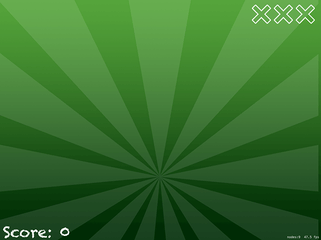 That leaves the createSlices() method, and this bit is new. In this game, swiping around the screen will lead a glowing trail of slice marks that fade away when you let go or keep on moving. To make this work, we're going to do three things:

Drawing a shape in SpriteKit is easy thanks to a special node type called SKShapeNode. This lets you define any kind of shape you can draw, along with line width, stroke color and more, and it will render it to the screen. We're going to draw two lines – one for a yellow glow, and one for a white glow in the middle of the yellow glow – so we're going to need two SKShapeNode properties:

And here's the code for the createSlices() method:

SPONSORED You know StoreKit, but you don’t want to do StoreKit. RevenueCat makes it easy to deploy, manage, and analyze in-app subscriptions on iOS and Android so you can focus on building your app.