We’ve now modified the user interface so that it considers ViewController to be a collection view controller, but we haven’t implemented any of the data source methods to make that work. This works just like table views, so we get questions like “how many items are there?” and “what’s in item number 1?” that we need to provide sensible answers for.

To begin with, let's put together the most basic implementation that allows our app to work. Normally this would be straightforward, but here we have a small complication: when we call dequeueReusableCell(withReuseIdentifier:for:) we’ll be sent back a regular UICollectionViewCell rather than our custom PersonCell type.

We can fix that we’ll add a conditional typecast, but that adds a second problem: what do we do if our typecast fails? That is, what if we expected to get a PersonCell but actually got back a regular UICollectionViewCell instead? If this happens it means something is fundamentally broken in our app – we screwed up in the storyboard, probably. As a result, we need to get out immediately; there’s no point trying to make our app limp onwards when something is really broken.

So, we’re going to be using a new function called fatalError(). When called this will unconditionally make your app crash – it will die immediately, and print out any message you provide to it. That might sound awful, but:

It’s best if you see fatalError() in some real code, so add these two methods now:

We haven't looked at any of this code before, so I want to pull it apart in detail before continuing:

Note that we need to typecast our collection view cell as a PersonCell because we'll soon want to access its imageView and name outlets.

These two new methods both come from collection views, but I think you’ll find them both remarkably similar to the table view methods we’ve been using so far – you can go back and open project 1 again to see just how similar!

Press Cmd+R to run your project now, and you'll see the beginning of things start to come together: the prototype cell you designed in Interface Builder will appear 10 times, and you can scroll up and down to view them all. As you'll see, you can fit two cells across the screen, which is what makes the collection view different to the table view. Plus, if you rotate to landscape you'll see it automatically (and beautifully) animates the movement of cells so they take up the full width. 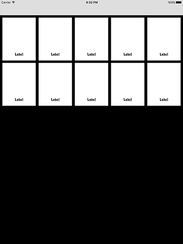