You can optionally also write else and provide a block of code to execute if the condition is false, or even else if and have more conditions. A "block" of code is just a chunk of code marked with an open brace – { – at its start and a close brace – } – at its end. 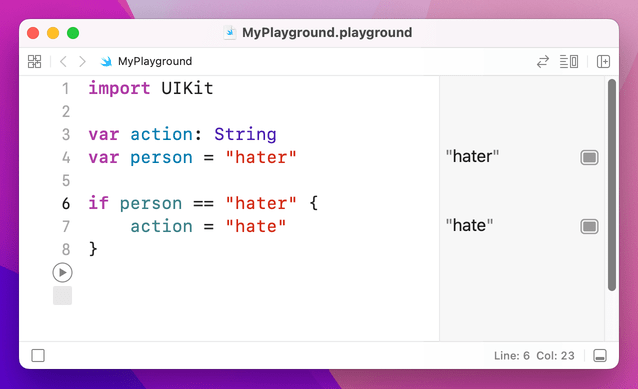 That uses the == (equality) operator introduced previously to check whether the string inside person is exactly equivalent to the string "hater". If it is, it sets the action variable to "hate". Note that open and close braces, also known by their less technical name of "curly brackets" – that marks the start and end of the code that will be executed if the condition is true.

Let's add else if and else blocks: 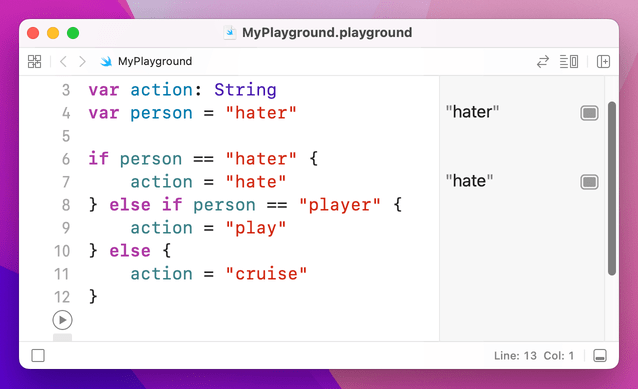 That will check each condition in order, and only one of the blocks will be executed: a person is either a hater, a player, or anything else.

You can ask Swift to evaluate as many conditions as you want, but they all need to be true in order for Swift to execute the block of code. To check multiple conditions, use the && operator – it means "and". For example:

Because stayOutTooLate and nothingInBrain are both true, the whole condition is true, and action gets set to "cruise." Swift uses something called short-circuit evaluation to boost performance: if it is evaluating multiple things that all need to be true, and the first one is false, it doesn't even bother evaluating the rest.

Looking for the opposite of truth

This might sound deeply philosophical, but actually this is important: sometimes you care whether a condition is not true, i.e. is false. You can do this with the ! (not) operator that was introduced earlier. For example: 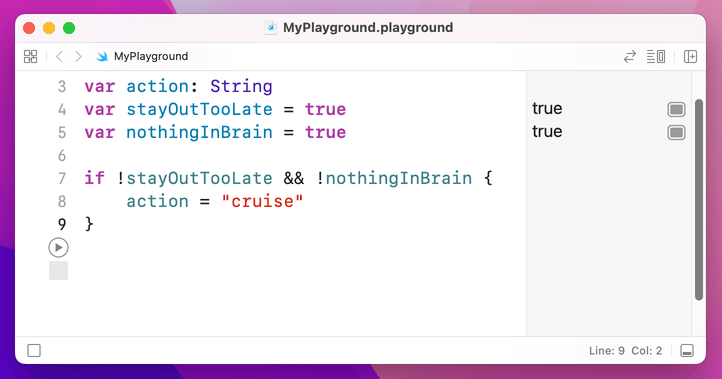 This time, the action variable will only be set if both stayOutTooLate and nothingInBrain are false – the ! has flipped them around.