< Back to Latest Articles

It’s not hard to make a basic property wrapper, but if you want one that automatically updates the body property like @State you need to do some extra work. In this article I’ll show you exactly how it’s done, as we build a property wrapper capable of reading and writing documents from our app’s container.

This is a free sample from Hacking with Swift+, a subscription that delivers high-quality tutorials as both articles and videos. Click here to find out more >

Watch the video here, or read the article below

We’re going to approach this property wrapper in two passes: a first pass able to read and write values, and a second pass that’s able to project a binding as well.

First, the easy part: we’re going to create a new property wrapper struct called Document that will store its value as a string, and also a URL pointing to the file it’s modifying. Because we’ll want to modify the text value over time, we’ll mark with the @State property wrapper so SwiftUI will look after it for us.

In order to be a valid property wrapper, our Document struct needs to have a wrappedValue property that stores the actual value we’re working with. In our case we already have that in value, but we made that private for a reason: when we interact with this property wrapper we want to add some extra work so that our new value gets written to disk automatically.

So, our wrappedValue property will be computed: when we’re reading it we’ll just send back value, but when we’re writing we’ll save it to wherever our file URL is then update value.

Now, we need a little bit of SwiftUI magic here, because if we have a setter for wrappedValue then we’ll be modifying the struct we’re inside and that will cause problems. Fortunately, we’re not actually changing the Document struct: we’re using @State, so we’re bypassing the struct entirely and having SwiftUI store the value. So, rather than making a regular setter, we can instead make a nonmutating setter, because our underlying struct won’t actually be changing.

Add this property to Document now:

And now we just need an initializer that provides initial values for both url and the value state. The first of these we can figure out by using FileManager to append the user’s filename to the app’s documents directory, but for the latter we need to load the initial value of the text file and wrap that in a State object.

That’s it – that’s our first pass of the property wrapper complete. To try it we need to update ContentView to use the @Document property wrapper and place its context inside a text view, but in order to make the test interesting we’re also going to add a button to simulate changing its value – this will just generate a random number and place it into the document.

If you run that now you’ll see the text view is empty by default, and if you press the button nothing will happen. Yes, after all that work we don’t actually have much to show, but that’s okay: with one tiny change we can bring the whole thing to life.

You see, right now SwiftUI doesn’t realize it should be watching our property wrapper for change notification, even though it has an @State property inside there. To fix this we need to make Document conform to the DynamicProperty protocol, like this:

In fact, that’s all we need to do – SwiftUI will take care of the rest for us. Go ahead and run the app again, because if you press the button it will update automatically. Even better, the new contents have been written to “test.txt” automatically, so if you relaunch the app you’ll see it remembers its last value – nice!

Wrapping a simple string works great for simple property wrappers like we have right now, but for more advanced purposes you’re also likely to want to expose a projected value. This allows us to create an alternative way of using the property we’re wrapping, and it’s down to us to define exactly what it does.

SwiftUI’s own @State property wrapper uses the projected value to create a binding for its data, and if we do the same thing here then it would allow us to bind directly to a document so that every change we make gets saved out.

This takes remarkably little code to accomplish. First we need to add a new property to Document that declares our projected value and how it works. Projected values must always be called projectedValue, but otherwise can work however you want.

So, start by adding this property to Document:

It’s worth stopping to step through what that code does: when our binding is written to we update wrappedValue, which in turn triggers our nonmutating setter, which is what causes the new value to be written to disk.

And now we can update ContentView to bind a TextEditor directly to our document, like this:

If you run that back you’ll see every change you make is immediately saved, and will also be restored when you relaunch the app. Nice!

If you want to take this tutorial further, here are some suggestions:

If you liked this, you'd love Hacking with Swift+…

Here's just a sample of the other tutorials, with each one coming as an article to read and as a 4K Ultra HD video. 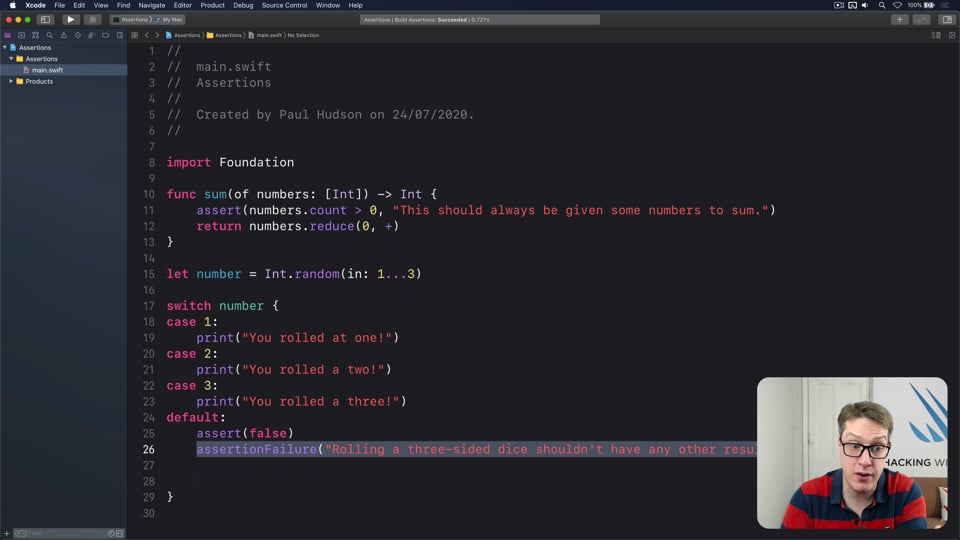 Assertions allow us to have Swift silently check the state of our program at runtime, but if you want to get them right you need to understand some intricacies. In this article I’ll walk you through the five ways we can make assertions in Swift, and provide clear advice on which to use and when. 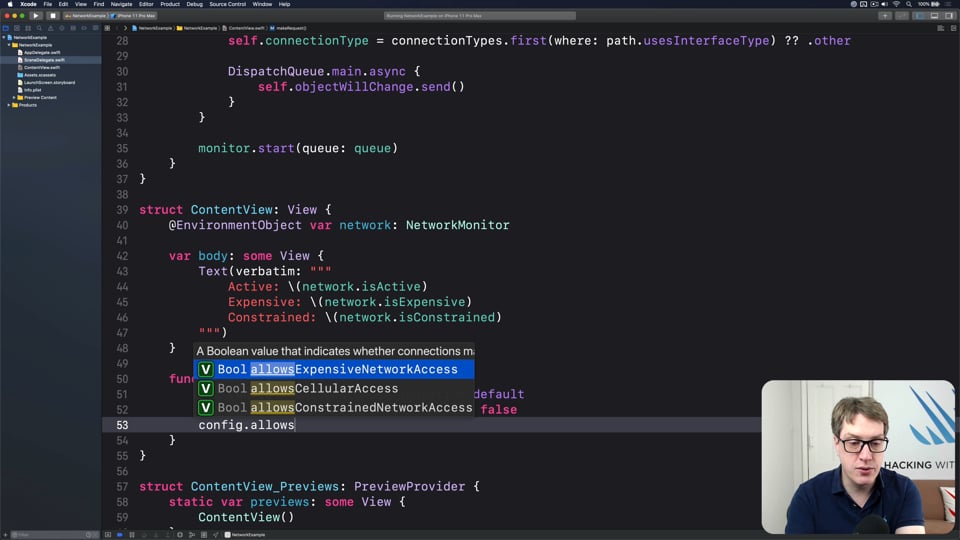 Anyone can write Swift code to fetch network data, but much harder is knowing how to write code to do it respectfully. In this article we’ll look at building a considerate network stack, taking into account the user’s connection, preferences, and more. 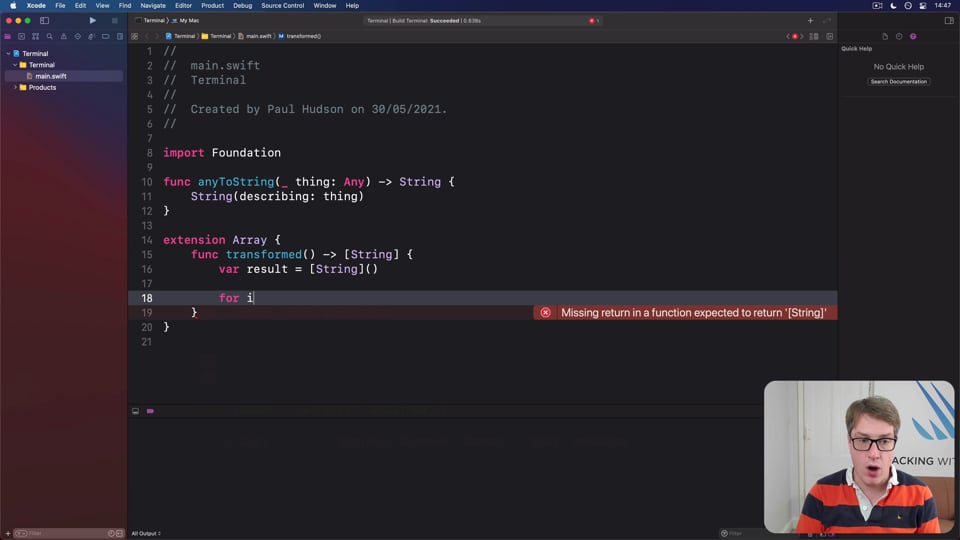 In this article we’re going to look at the map() function, which transforms one thing into another thing. Along the way we’ll also be exploring some core concepts of functional programming, so if you read no other articles in this course at least read this one! 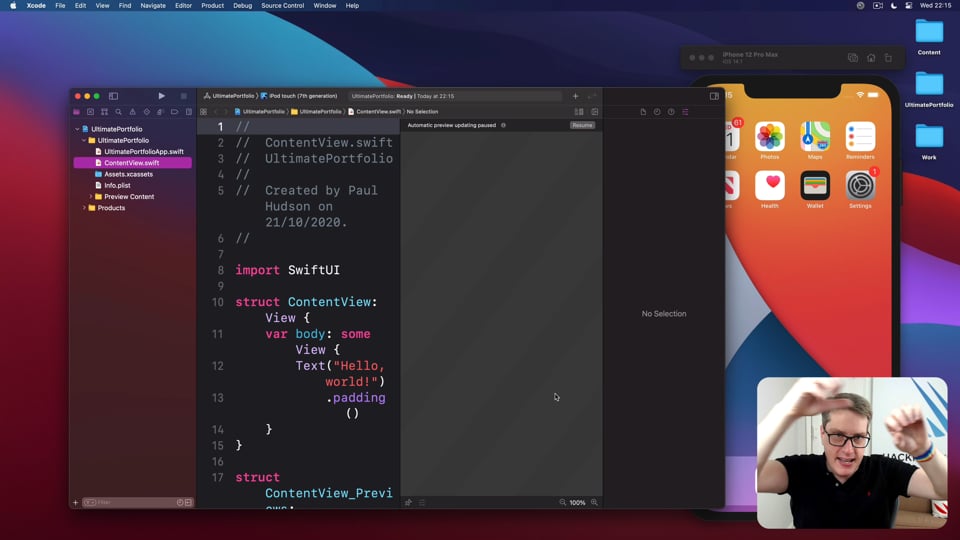 While I’m sure you’re keen to get started programming immediately, please give me a few minutes to outline the goals of this course and explain why it’s different from other courses I’ve written. 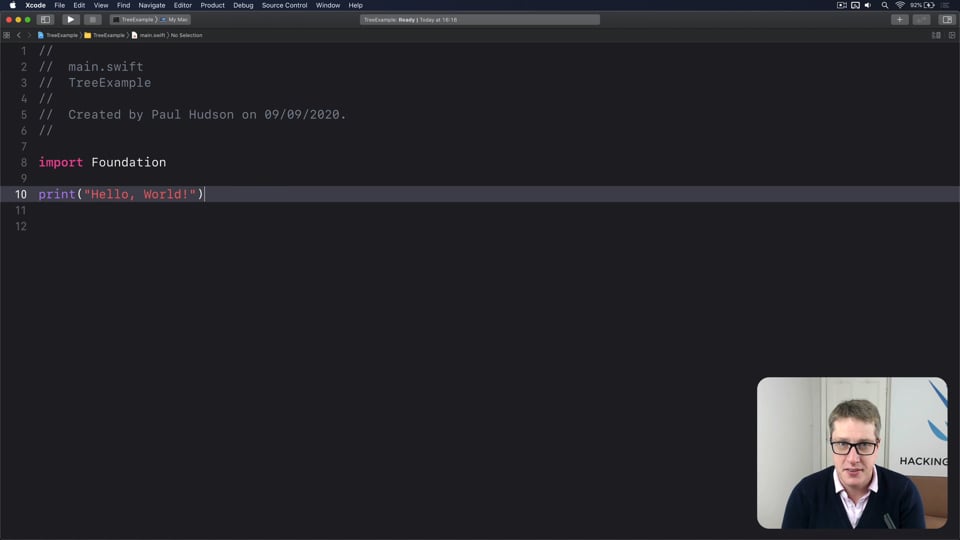 Trees are an extraordinarily simple, extraordinarily useful data type, and in this article we’ll make a complete tree data type using Swift in just a few minutes. But rather than just stop there, we’re going to do something quite beautiful that I hope will blow your mind while teaching you something useful. 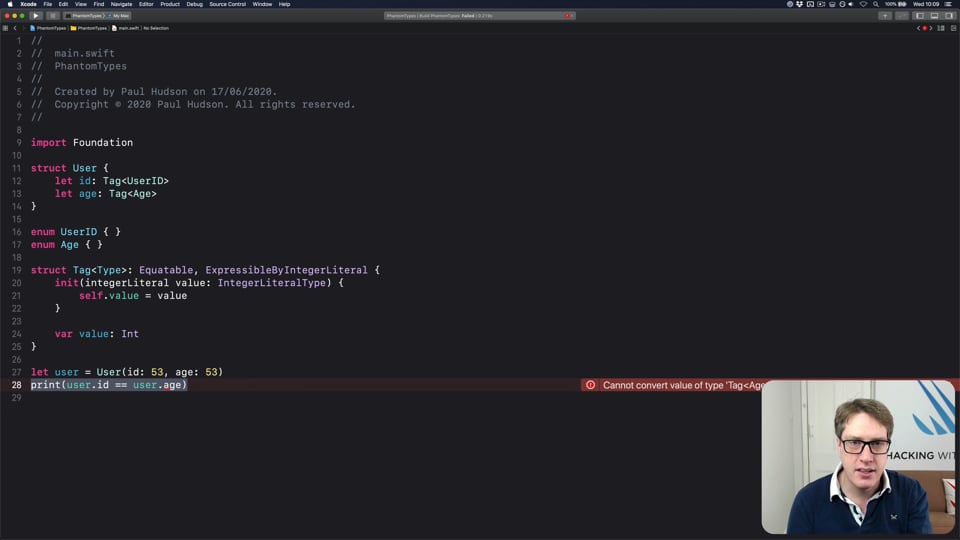 FREE: How to use phantom types in Swift

Phantom types are a powerful way to give the Swift compiler extra information about our code so that it can stop us from making mistakes. In this article I’m going to explain how they work and why you’d want them, as well as providing lots of hands-on examples you can try. 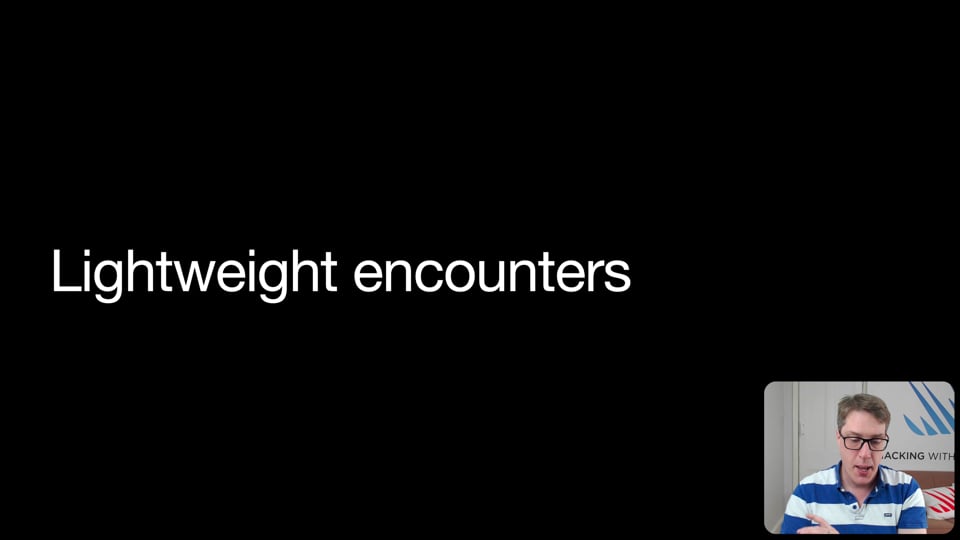 Before you dive in to the first article in this course, I want to give you a brief overview of our goals, how the content is structured, as well as a rough idea of what you can expect to find. 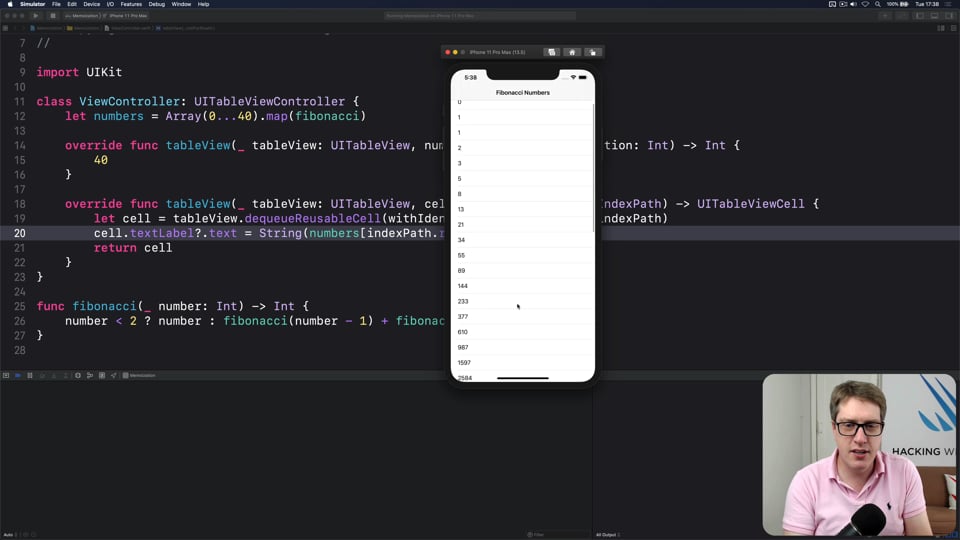 In this article you’ll learn how memoization can dramatically boost the performance of slow functions, and how easy Swift makes it thanks to its generics and closures. 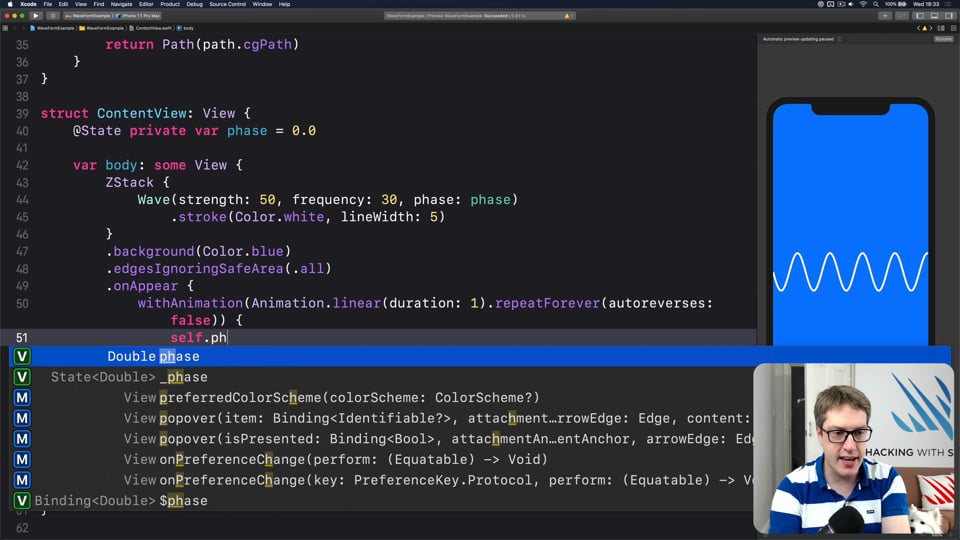 In this article I’m going to walk you through building a WaveView with SwiftUI, allowing us to create beautiful waveform-like effects to bring your user interface to life. 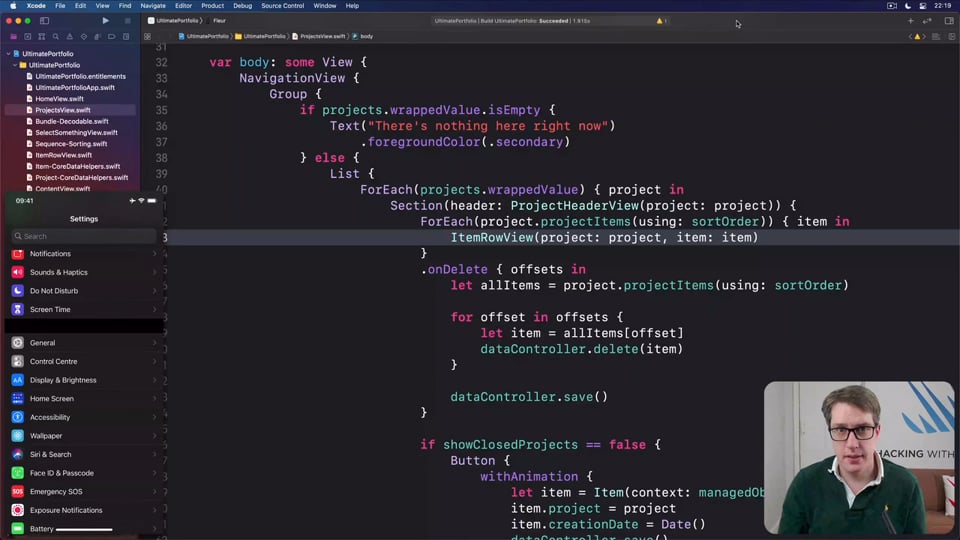 It is my firm belief that every iOS app should be usable to everyone, and putting in the work to make your app function well no matter who is using it says a lot about the kind of developer you are. 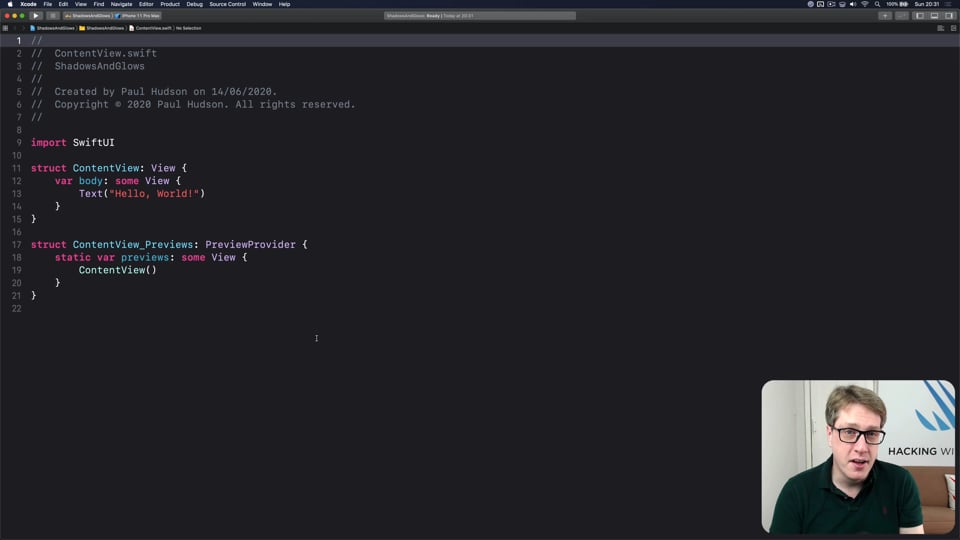 SwiftUI gives us a modifier to make simple shadows, but if you want something more advanced such as inner shadows or glows, you need to do extra work. In this article I’ll show you how to get both those effects and more in a customizable, flexible way. 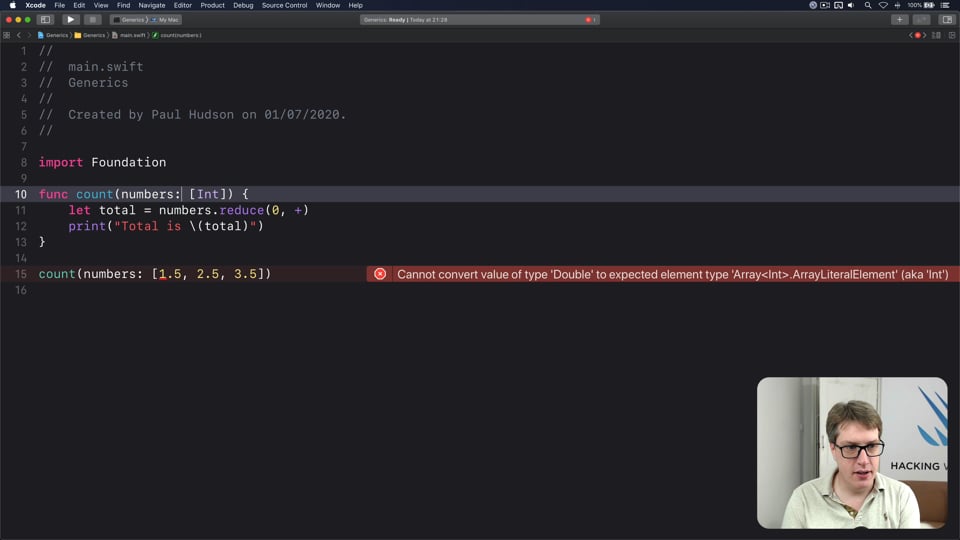 Generics are one of the most powerful features of Swift, allowing us to write code once and reuse it in many ways. In this article we’ll explore how they work, why adding constraints actually helps us write more code, and how generics help solve one of the biggest problems in Swift. 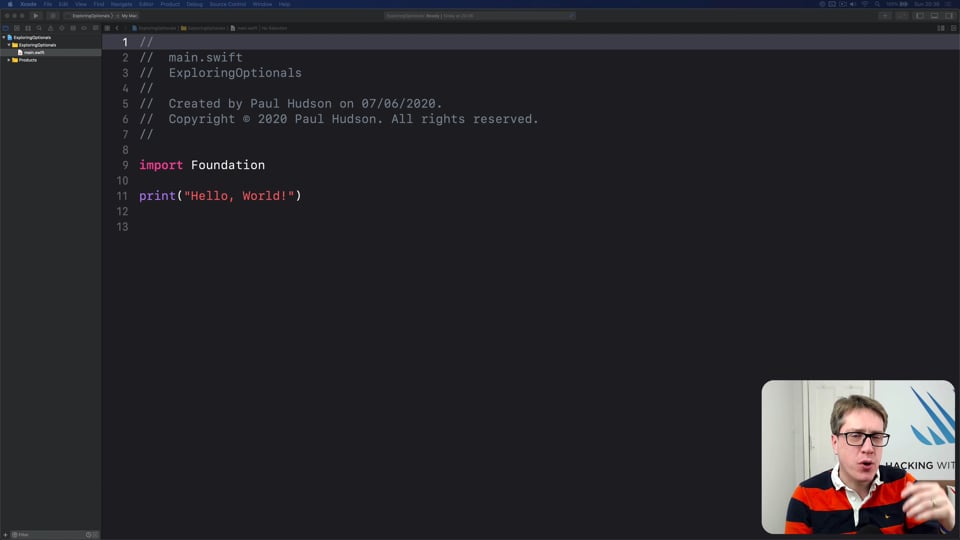 FREE: Making the most of optionals

Swift’s optionals are implemented as simple enums, with just a little compiler magic sprinkled around as syntactic sugar. However, they do much more than people realize, and in this article I’m going to demonstrate some of their power features that can really help you write better code – and blow your mind along the way. 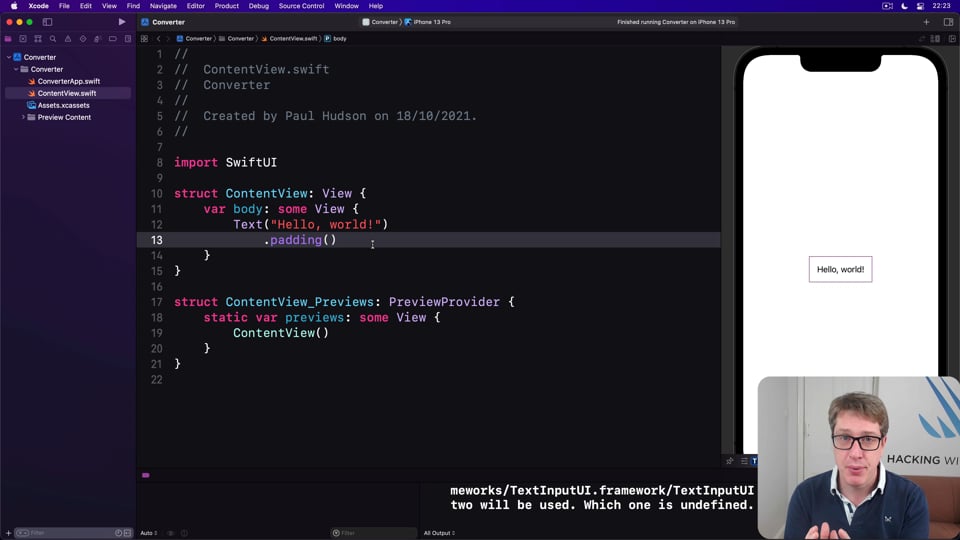 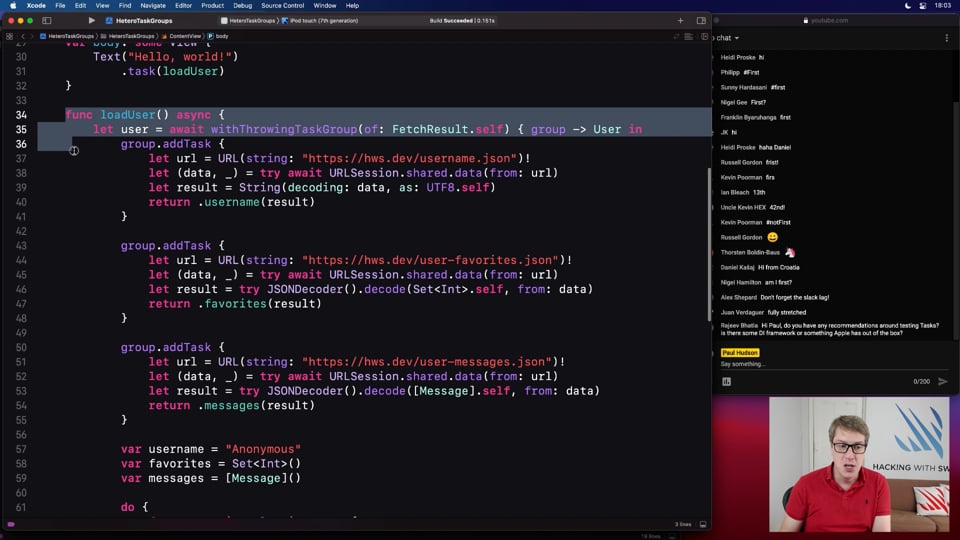 In this part we finish by directly comparing async let, tasks, and task groups, then move on to the final boss of Swift concurrency: actors. 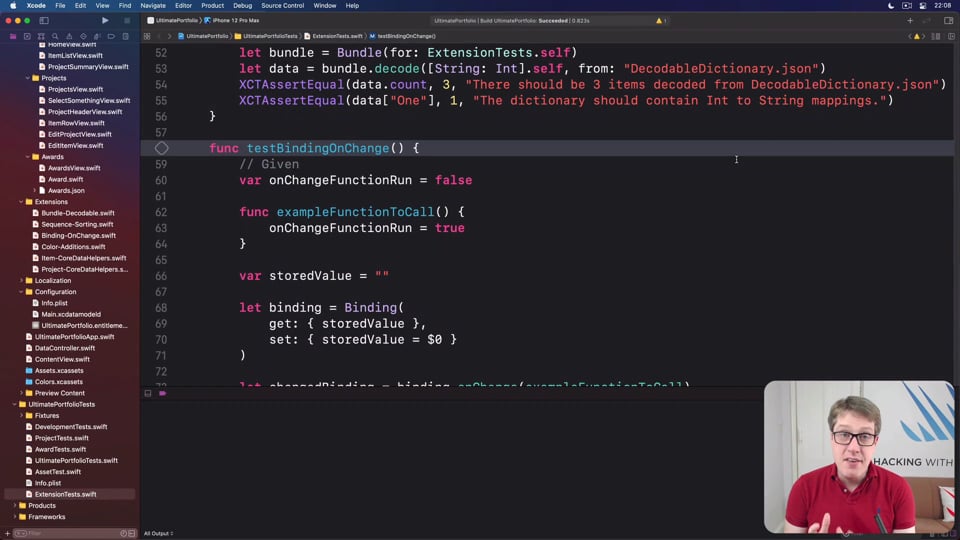 Although our project doesn’t do anything particularly performance intensive, having a great portfolio app means you should at least attempt to demonstrate you understand how performance tests work. In this chapter we’ll add just such a test to our project, to make sure our award counting work is fast. 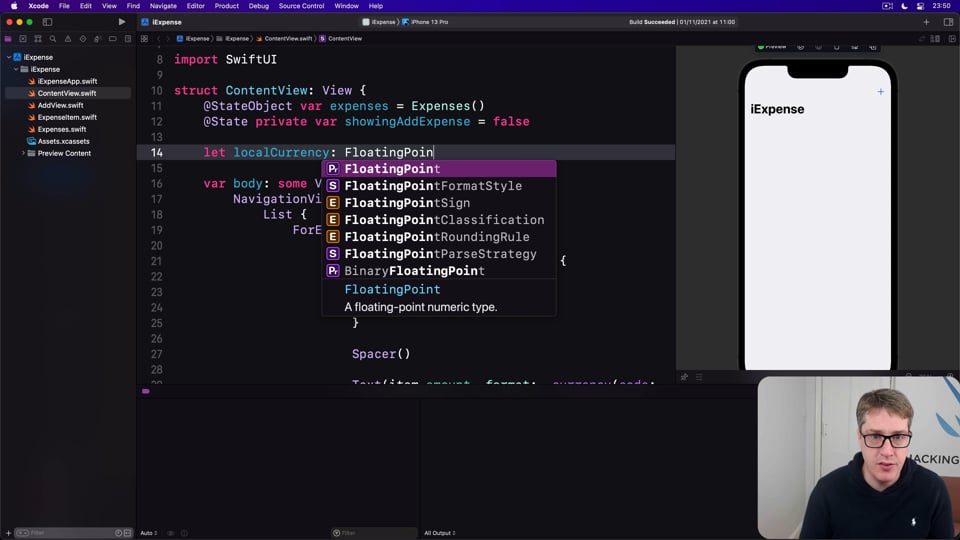 This challenge asks you to support the user’s preferred currency symbol, style your expenses somehow, then split the list into two sections. Let’s tackle it now… 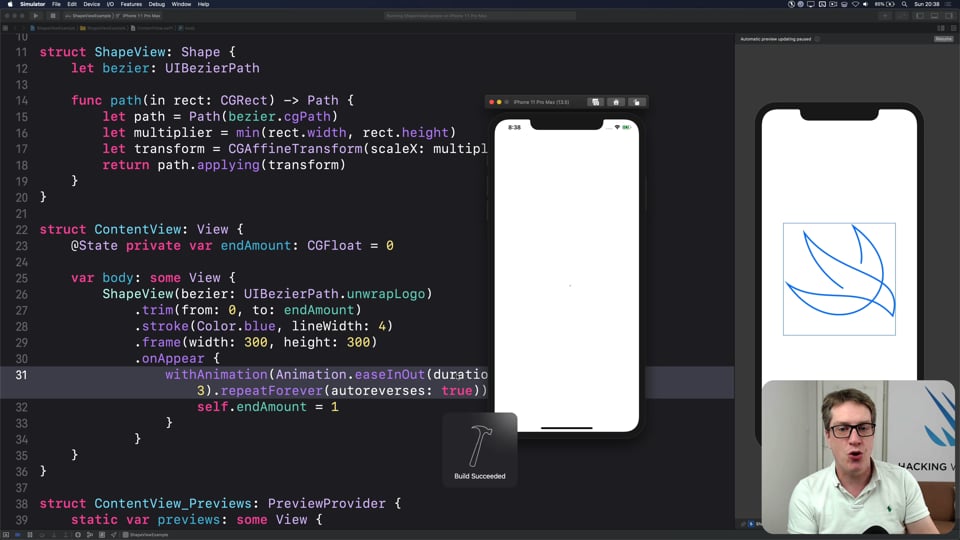 Bezier paths let us draw all sorts of shapes efficiently and smoothly, and with a little work we can bring them into SwiftUI then animate them smooth, and in this article I’m going to walk you through making a very simple ShapeView struct to do just that. 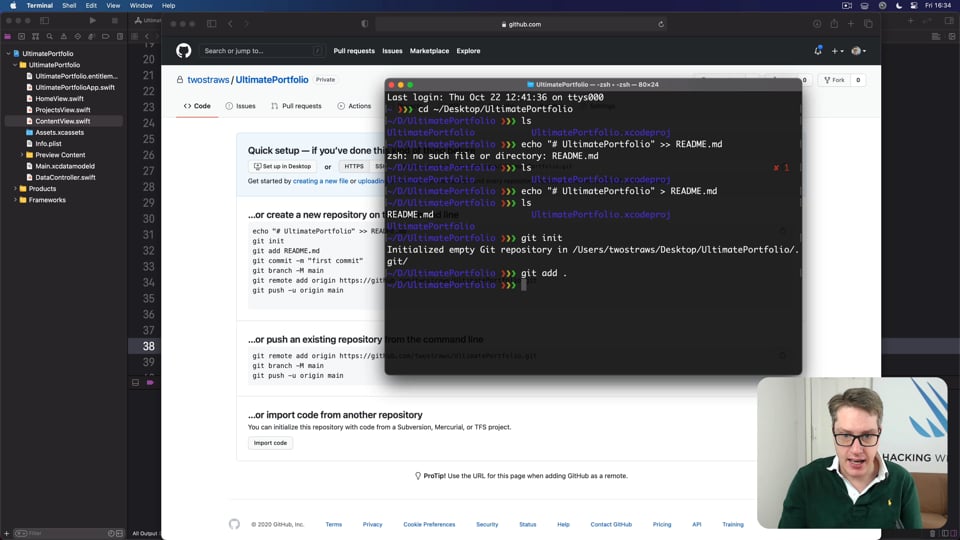 At this point we have something very simple working, so now is a great time to stash your code away somewhere safe using source control. If you already know how to use Git then you’re welcome to skip this part. 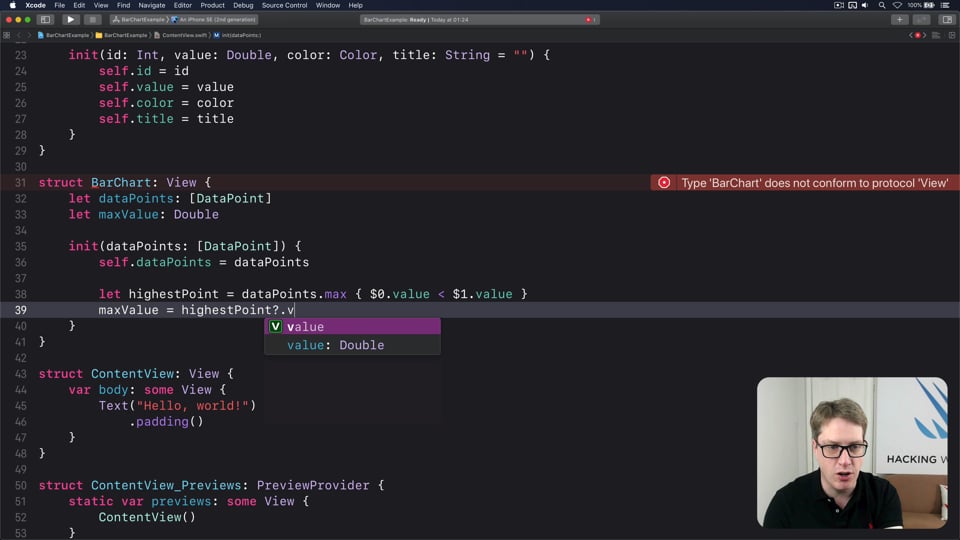 Bar charts are one of the simplest and most common ways of representing data visually, and are often taught to kids at a young age. In this article I’ll show you how easy it is to render bar charts in SwiftUI, and show you various customization options to bring those charts to life.