Build a Simon game for watchOS

Repeat the sequence right on your wrist with WatchKit 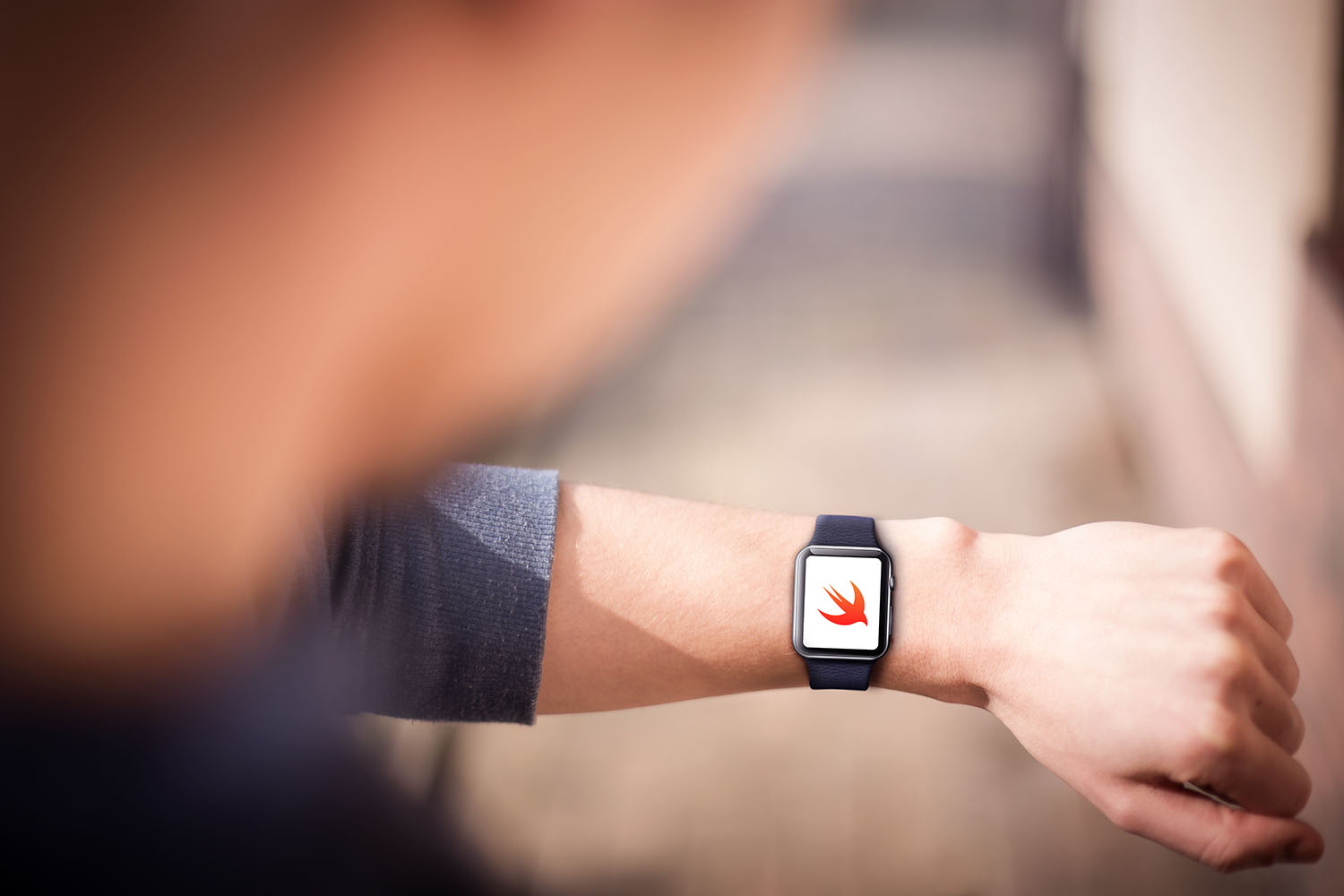 I find watchOS such a fascinating platform to code for, because you have limited screen space, limited system resources, and limited user attention all at the same time. At the same time, watches go everywhere with your users, which makes them perfect for diverting little apps for times they forget their phone or run out of battery.

In this article we’re going to build a simple Simon game: users will see four colors, and will be asked to repeat increasingly long sequences of colors – when they get a sequence wrong they lose immediately. This ought to be a nice and gentle introduction to watchOS if you haven’t used it before, and you can use the watchOS simulator if you don’t have a real device.

Setting up our basic user interface

Start by making a new watchOS app using the iOS App With WatchKit App template. Call it Simon, and make sure you deselect “Including Notification Scene” from the list of checkboxes – we won’t be using it here, and it just adds clutter to the storyboard.

Yes, I said storyboard: all watchOS apps must have their user interfaces designed in a storyboard, with no option to do it in code.

So, let’s start there: open Interface.storyboard, and you should a single empty interface controller. This is watchOS’s equivalent of a view controller, although it has a much simpler layout system as you’ll see.

Use the object library to drag out two groups, one above the other. Groups let us arrange elements horizontally or vertically next to each other, to help keep our UI organized. Select both of the groups and change their height from “Size to Fit” Content to “Relative to Container”, and enter 0.5 into the box below so they each take up half the height of the screen.

Obviously we don’t want half our user interface to be off the screen, so we need to make the buttons take up less space. To do that, select all four buttons using the document outline, then change them to have width of “Relative to Container” with a value of 0.5, and a height of “Relative to Container” with a value of 1. This should make all four buttons take up equal space in the interface. While you have them all selected, delete their “Button” titles, but change their font size to be System 120 – we’ll be using that to show which thing to tap. 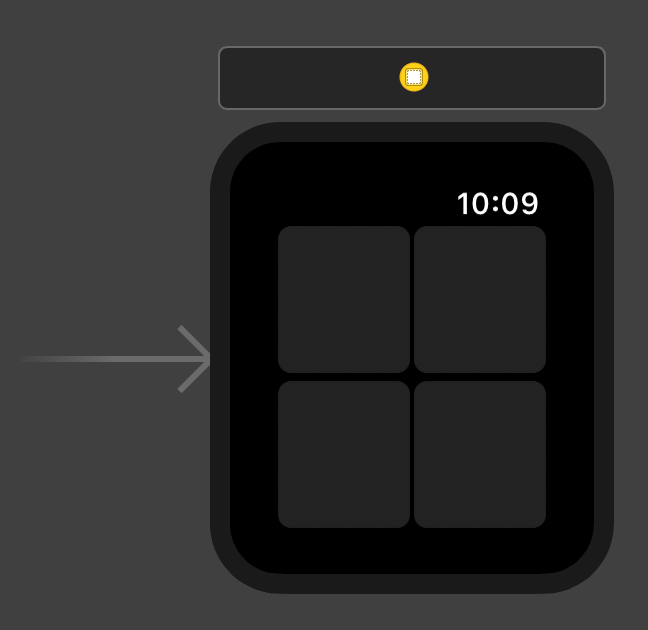 This is a Simon game, so we need to change each button to have a different color to make them easier to remember. I went for red, yellow, green, and blue, but choose whatever looks good to you. 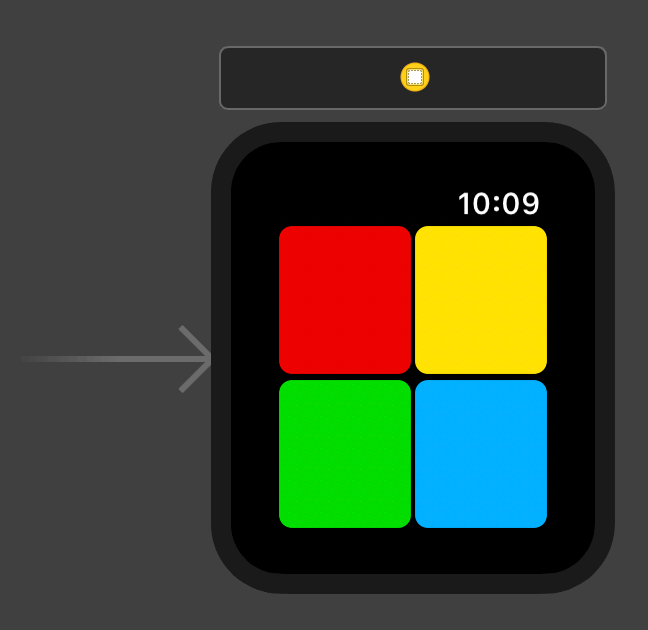 Finally, we need to create some connections for our user interface. So, switch to the assistant editor and create four outlets for the four buttons (I went for red, green, yellow, and blue), and four actions (redTapped(), greenTapped(), yellowTapped(), and blueTapped() for me.)

We’re done with the storyboard now, although if you’re a pedant like me you might have noticed the horizontal gaps between our buttons is ever so slightly larger than the vertical gap. To fix that, select Interface Controller in the document outline, then use the attributes inspector to change spacing to 3. The default is only 1 point more, but that slight difference offended my eyes!

Switch back to the standard editor, and open InterfaceController.swift for editing.

This game has two states: either the user is watching buttons flash, or is tapping buttons to recreate the sequence. We’re going to start with that first state, which means making our app flash while the user watches.

So, add these properties to the InterfaceController class:

To play a sequence, we’re going to call one method repeatedly: playNextSequenceItem(). This will check whether the sequence has finished: if it has it will set isWatching to false and reset sequenceIndex so the player can take over, but if it hasn’t then it will make one of the buttons flash.

We already gave our buttons a nice and big font size, so all we need to do is write some text in the button to make it clear that’s the one to press. However, we need to do this with precise timing: we can’t show the text immediately because otherwise flashing the same button twice won’t be obvious – the user will just see the text for a little longer. So, we need to delay by a fraction of a second. We then need to delay again, after which we can clear the button’s title and call playNextSequenceItem() again.

Next, we need a method that advances our game each time it’s called. This will pick a random button and add it to our sequence, reset sequenceIndex so the flashing starts at the beginning, set isWatching back to true so the player instruction is correct, then call playNextSequenceItem() after a second so the user has a short break.

Now, when we ask for a random element from an array, Swift returns us an optional because the array might be empty. This means for an array of buttons we’ll get back an optional optional – something you rarely want to see.

And honestly I wouldn’t blame you: we know that randomElement() must return an item because we just made the array, and we also know the optional types inside all have values, because they are our buttons. However, the double exclamation mark sits uneasily with me because it’s not obvious why it’s there, so a slightly better solution is this:

By specifying the array type [WKInterfaceButton] we lose one level of optionality, and I think the use of randomElement()! is self-explanatory – there’s little point adding a guard in there because we literally just made the array.

Anyway, let’s put all that into a new method called addToSequence(). Here’s the code:

We just need to call that when we’re ready to start. The watchOS equivalent of viewDidLoad() is awake(withContext:), and you should have a method stub for that already. So, modify it to this:

And we’re done with this step! To try out the game so far, such as it is, go to the Product menu and choose Scheme > Simon WatchKit App. This will activate one of the watchOS simulators, but if you go back to the Product menu and choose Destination you can select whichever one you prefer – personally I prefer using the largest option while testing and the smallest while designing.

All being well you should see one color flash when the game begins. If you’d like to double check everything worked, try changing the addToSequence() method to this:

That will add 10 buttons each time the method is called, so you should see ten flashes when the app starts. Make sure you undo that change once you’ve verified that it worked!

So far we’ve designed our user interface, and made a sequence of buttons flash. To make this an actual game, we need to let the player tap buttons, then write code to make sure they tapped in the correct sequence.

This will mostly be done with one new method, called makeMove(). This will accept a WKInterfaceButton as its only parameter, and check whether it’s the next item in our sequence. If it is then the player is correct, so we can increment the sequence and perhaps even go back to watching if they reached the end of the sequence. If it isn’t the next button in our sequence then the player is wrong: we need to show an alert with their score, then restart.

Of all that code, the only part that’s new is the last one: showing an alert. watchOS makes this nice and easy: our interface controller has a dedicated presentAlert() method that shows an alert with a title and message, and we can attach any number of WKAlertAction instances to it. Each of those actions has a title plus a closure to run when it’s triggered, so we’ll create one with the title “Play Again” that just calls startNewGame() to reset the game.

To finish up, all we need to do is call makeMove() from our four @IBAction methods, passing in the correct button:

And that’s our game finished!

In just over 100 lines of code we’ve implemented a simple game for watchOS, and to be honest simple games really are the key with this platform – for anything serious your user will always prefer their phone, so try to think of games that work well as distractions for when their phone isn’t around.

If you wanted to take this game further, you could:

I hope you take the time to experiment further – watchOS is a surprisingly powerful system, and even includes larger frameworks such as SpriteKit and SceneKit. So, put your phone to one side for an hour or two and see what you can build!