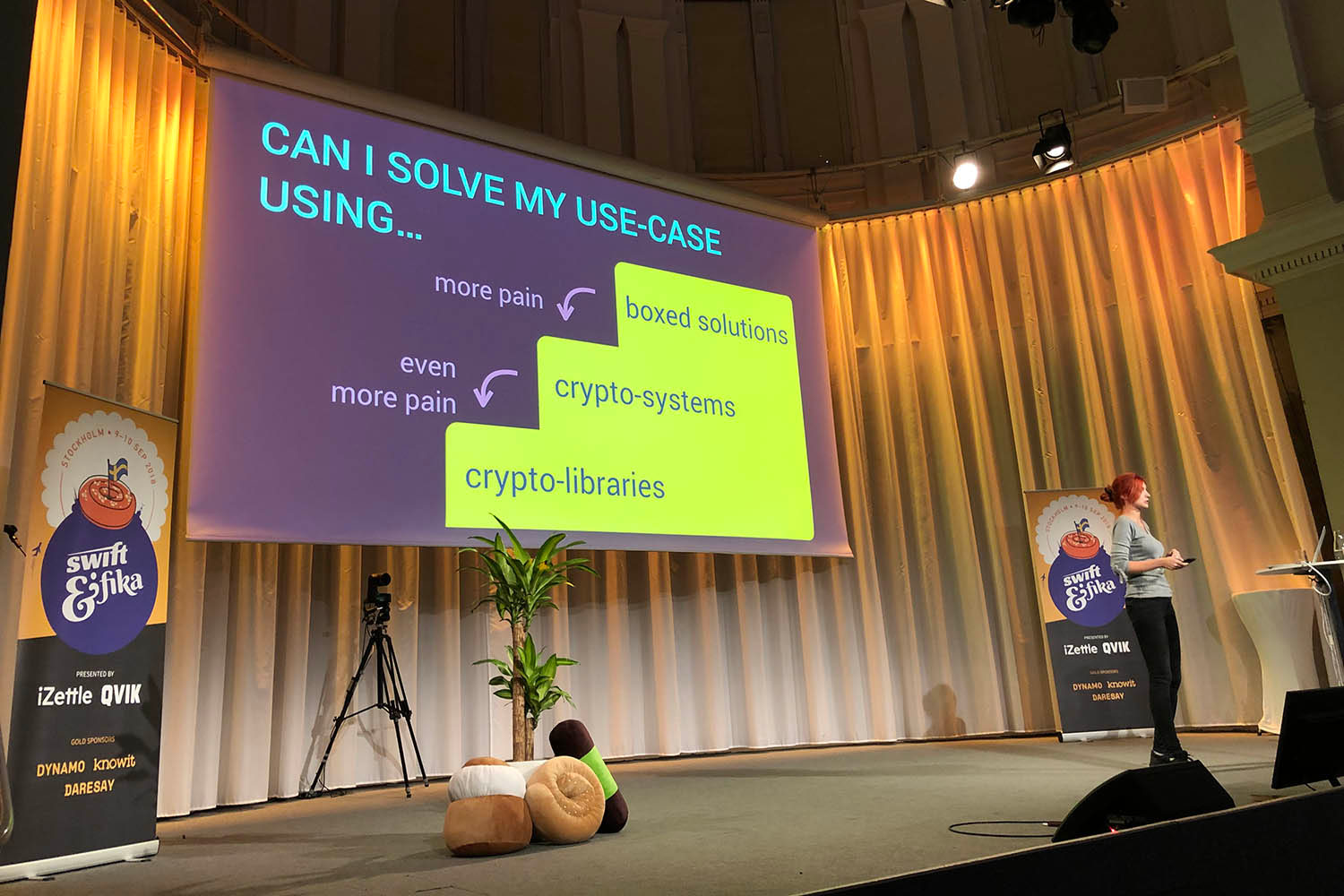 Swift & Fika is an all-new Swift conference in Stockholm, but honestly you’d never know unless you were told – the organization was slick, well-known speakers flew in from around the world, and the organizing team were relaxed and enjoying the event as much as everyone else.

As is increasingly common in community-driven events, Swift & Fika started with a day-long selection of social events: a bike tour of the city, bouldering, museum tours, and even a VR experience all helped to encourage attendees to make friends, and to top it off there was a “dinner with strangers” event in the evening. In my experience this can be so beneficial, even if you’re not naturally that social – when the conference starts it means you recognize more friendly faces, and you hopefully have more opportunities to discuss talks with people you met.

The conference day was split up into talks from nine speakers, including Janina Kutyn on app performance, JP Simard on Swift static analysis, John Sundell on API design, and Anastasiia Vixentael on app security. This was the first time I’ve seen Yoichi Tagaya speak about his work - he’s the creator of the popular Swinject dependency injection tool, and it was a real privilege to have him join us all the way from Tokyo. My own talk was called “How Not to Write Swift”, for which I bought a special prop: The Hoodie of Truth.

To help keep the whole event fairly relaxed, Swift & Fika had two secret weapons. First, the MC was Jack Nutting, who introduced all the speakers and provided some comic relief with live musical numbers. And second was the fika – officially it’s Swedish for “break time”, but in practice it means chatting over coffee and cinnamon buns or other delights. As useful as the main presentations were, the fika time meant that everyone could mingle, make friends, and hopefully build relationships that will last long after the event has finished.

Finishing off the day was a remarkable after-party at Spotify’s headquarters. As well as having a rather incredible view over Stockholm’s skyline, the party also had a live music experience courtesy of Lula where Mi.mu gloves were used to control the audio through movement and gestures.

Despite being in their first year, Swift & Fika attracted a fantastic line-up of sponsors, did an excellent job organizing student and diversity tickets, and made a large and impressive venue feel warm and welcoming — if you watch the video I think you’ll agree they staged a truly memorable event.

Hacking with Swift: Until Swift & Fika came along, Stockholm didn’t have an iOS development of its own. Why Stockholm and why now?

Alek Åström: Stockholm has had a great iOS dev community for a long time, with regularly packed CocoaHeads meetups trailing back to pre-iOS days, often with 100+ attendees, international speakers and a steadily growing, very active extension of that community on Slack. So both me and Reda felt for a long time that there was a need for a conference here, just that we were already occupied with organizing the local community.

Adding to that, I’ve always had a strong love for the city of Stockholm, and I really wanted to share that love and be able to show our amazing city to people in the international community.

Years passed, more European conferences started to pop up, and we realized we needed to make this happen one way or another. So in May, we finally took the plunge, and after a few weeks of flurried frenzy, we announced Swift & Fika.

HWS: This initial Swift & Fika was a fairly traditional conference format: invite speakers to talk about what’s new in iOS and Swift, then give attendees lots of chances to meet other developers and exchange information. How do you see this changing in future editions?

AA: This first edition served very much as training wheels for us as conference organizers, learning the ropes of what entails in producing an event of this scale. But there is a much grander vision for what we want Swift & Fika to become.

Gathering all these amazing, influential figures in the community such as yourself, without having some kind of exchange between them feels like a wasted opportunity to me. I would like for a format where ideas are questioned and engaged in conversation, where there is not only monologue, but dialogue, taking the community forward by using the conference as a forum. This could be done through panel debates & open discussions and possibly other formats too – something we’re exploring for next years edition.

We’re also doubling down on the social activities day after getting so much great feedback. I really believe those personal connections you make, such as when the opportunity is given in smaller groups, is the biggest value from attending a conference. And as a huge bonus, it helps make the community feel more inclusive and welcoming, especially for attendees coming alone.

HWS: If it came down to it, which would you choose: Swift or Fika?

AA: As much as I love Swift, I’d never deny a tasty fika!